For years the casual English football fan has berated La Liga for its lack of competitiveness, with the duopoly of Barcelona & Real Madrid often winning the league. But every decade or so, a challenger emerges from the midst of obscurity. The early ’00s saw Deportivo La Coruña & Valencia appear as competitors for the league, winning three titles in five years between them. Barcelona & Real Madrid then regained control, with nine titles in nine years. The pair had built themselves around two of the greatest goalscorers to ever play the game; Lionel Messi and Cristiano Ronaldo, and the title looked all set to be a tug of war between them for another decade. But a contender had emerged; Diego Simeone’s Atlético Madrid.

His team were able to do the seemingly impossible, claiming La Liga. Simeone was rightly applauded; winning the league on a comparatively tiny budget represented one of the most incredible managerial feats of all-time. His team brought a unique blend of aggression and intensity, technical and tactical ability. But when a club overachieves, the vultures circle, and Atlético lost three of their most important players; Filipe Luís, Diego Costa and Thibaut Courtois, all to Chelsea.

Atléti were able to reinvest, but it would take something special to compete for the league again. The 2014-15 season has seen a slight change of emphasis, and set pieces have been of huge importance. At time of writing, Atléti have scored 19 league goals from set pieces (excluding penalties); nine more than any other team, and two more than they’ve scored from open play. 12 of these (30% of total) have come from corners.

With the emergence of statistical analysis in football, the corner has become a forsaken art. It has even been suggested that corners are largely useless, and when “the average EPL team scores 1 goal from a corner about every 10 games”, it’s no surprise this opinion is agreed upon by many. But Atléti have been scoring at a rate of better than a corner every *two* games. Given the mediocre amount of corners they take (5.2 per game — 9th in La Liga), this is astonishing.

Corners represent a game within a game. They are unique in that they are fairly replicable, in a way that few situations in football are. If you thoroughly analyse the defensive/offensive system of the opponent, then it is reasonably simple to predict the way they will set up in the next match.

Atléti face two types of opponents in the corner-taking mini-game: those who understand Atléti’s main strength & attempt to negate it, and those who don’t.

For regular watchers of Los Rojiblancos, it won’t be a surprise to hear their most successful corner routine: the outswinging corner to the near post. In the early part of the season, this was their go-to move. Because it worked. 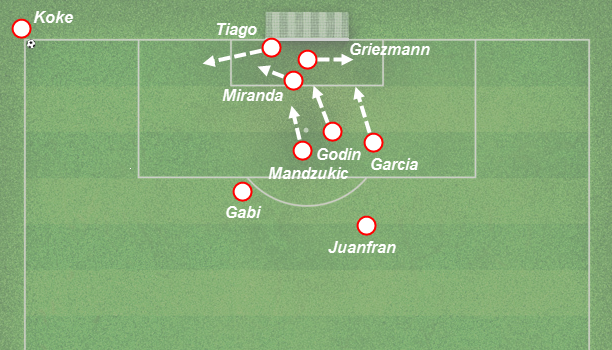 In their opening five matches, they used this play ten times from their twenty nine corners. Two goals came from these ten corners. They also targeted the near post a fifteen times, with three of the four goals from corners. They were going to the near post every other corner, and the opposition weren’t expecting it.

The watershed moment came against a well-prepared Valencia side, who had two men occupying the near post zone. After this game, it became the norm to defend Atlético corners in this way. Only a few teams (Espanyol, Deportivo, Granada) seemed to continue with a strict man-marking system.

The difference over the course of the season is stark: their conversion rate for near post outswingers against a man marking system is 23.08%, with a 11.11% conversion rate against teams using a[n at least partially] zonal-based system. This efficiency is still high for corners, but the change meant halving the effectiveness of Atléti’s greatest weapon.

Facing tweaked defensive systems regularly, Atléti began to innovate themselves; they went from going to the near post 57% of the time, to 45%. They also lowered the amount they ran the play above; 27% of the time, to 15%.

Early on in the season, their corner threat was two-fold: near post and Diego Godín.

In their next nine games, they came up against a mixed marking style six times.

First touches for corners from the next six games against a mixed marking style.

As expected, targeting the near post became less effective. The only time Atléti were able to take the first touch in these instances was when the delivery and the near post run were both perfect. Tiago proved his worth in these situations and evaded three markers to score a near post header against Malaga.

Their effectiveness in the ‘Godín zone’ was again excellent, and even improved. Having previously employed Mario Madzukic as an option in the six yard box, Simeone decided to use the Croatian as one of the runners from deep alongside Godín. This utilised his height, and with a running jump, it became difficult for the defenders to match him. Mandžukić replaced Raul Garcia in this role, who has only created a first Atléti touch in six of the corners aimed at him.

The image also illustrates Atléti’s new-found propensity for the short corner, another technique they used to score against Malaga. For a defense focussed on defending the near post at all costs, this presented a new challenge.

Corners are generally low percentage attacks due to the inherent numerical advantage the defensive team has. With attacking teams often applying the rule of keeping one more defender back than the other team has forward, and the corner taker obviously being out of play, the defending team has a two man advantage. Atléti’s initial corner success came from clever runs to the near post, often with two men. At least one of these runners would lose their man, creating an overload in that area. The same principle applied to their short corner routine.

When a short corner option is offered, it instantly brings the corner taker back into play. The defensive team have a decision to make: do you commit one or two men to the short corner? 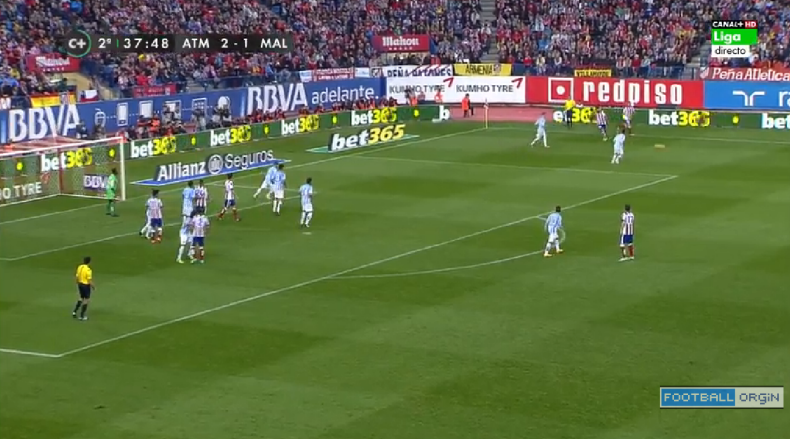 1: Malaga choose to press with two defenders. At this stage, this is not an issue. 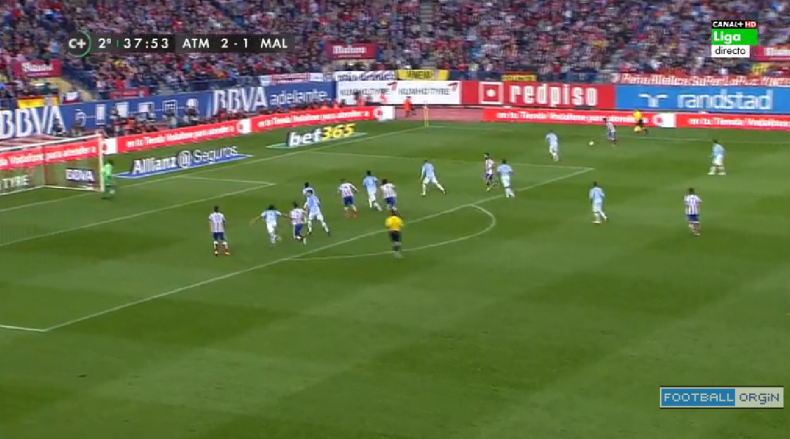 2: It is now 4v4 in the danger zone, with strict man marking on each attacker. The man at the back post is expected to mark Diego Godín and Raul Jimenez, which eventually creates the goal for Godín.

When the short corner was used against Malaga, they decided to commit two defenders to close down the short corner. These means even if the defensive team has a player covering the near post zone, it leaves every other player in a 1v1 in the centre. Against players with the jumping & heading ability of Diego Godín, this is dangerous.

Sending too few men to deal with the short corner can also be a risk. 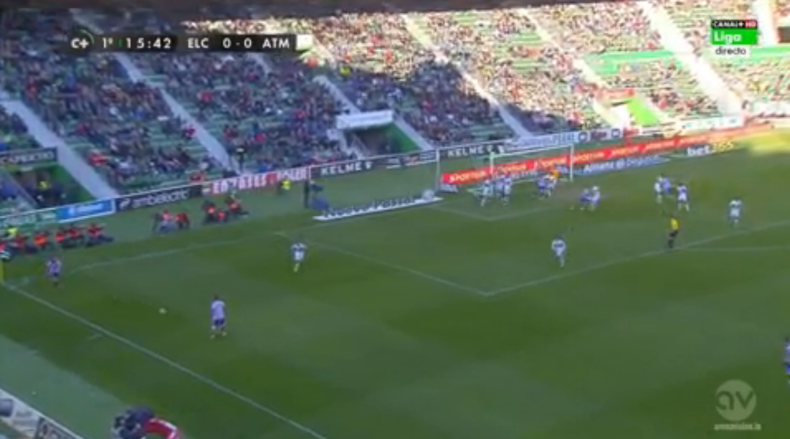 1: Elche initially commit one man to defend the short corner, but a second also comes. 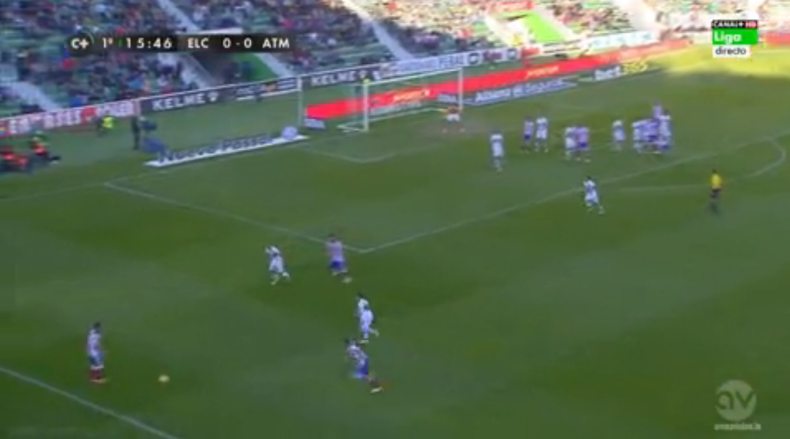 2: Siqueira spots the other defender, and makes a good run down the left. This creates a 3v2 and re-establishes Atléti’s overload. 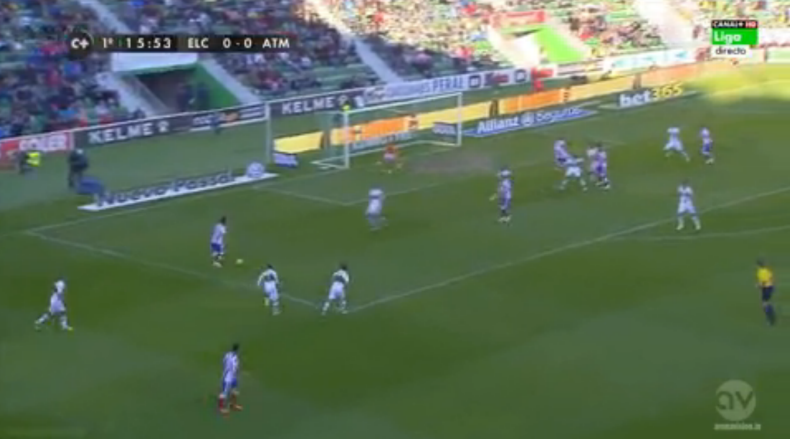 3: The man who was guarding the near post zone has to vacate his duties in order to close down Turan. This leaves Gimenez with space in front of him to attack. He does this well, turns the defender, and scores.

With so many strings to Atléti’s bow, it’s tricky to eliminate all their attacking options. But it’s not impossible.

The team that’ve best dealt with them from corners this year is, perhaps surprisingly, Barcelona. This was partly down to mistakes from Simeone and his team in setting 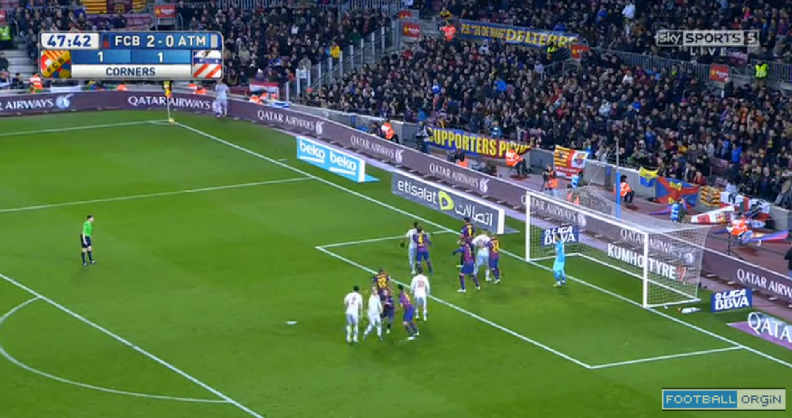 The first thing to notice is the reduced number of players Atléti are attacking with. This is because Barca have left Messi, Neymar *and* Iniesta up the pitch. This is particularly wise because of the trade-offs it creates. Simeone chooses to drag Tiago back in order to nullify the potential counter attacking threat, leaving an unfamiliar Mandžukić to target the near post.

Luis Enrique’s use of his two best set piece defenders is also a key component of their defense. Piqué & Busquets are vital, as the only two particularly tall Barca players. Piqué uses his organisational skills to act as a floating zonal marker between the ‘near post zone’ and the ‘Godín zone’. With the near post well under wraps, it’s important to target Godín and Busquets is the ideal man to defend him.

Since Simeone took over Atlético in 2011, his team have consistently been one of the best in the league from corners and set pieces generally. The fact that so many new recruits are adept in the air suggests a club focus on set pieces as a weapon. With the constant innovation and lack of preparation from opposition clubs, there’s no reason Atléti cannot maintain excellent conversion rates. 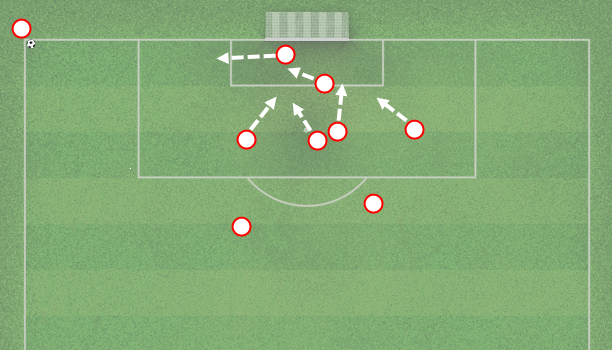 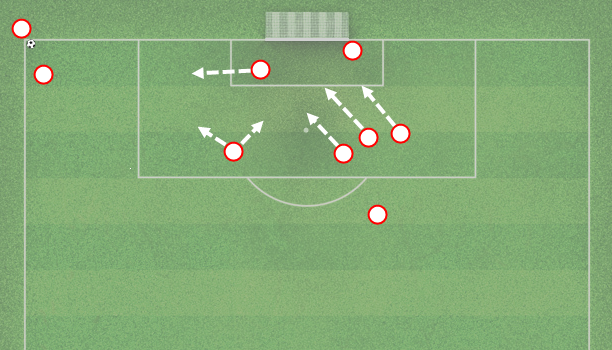 Atléti used a total of 18 separate plays throughout the season.