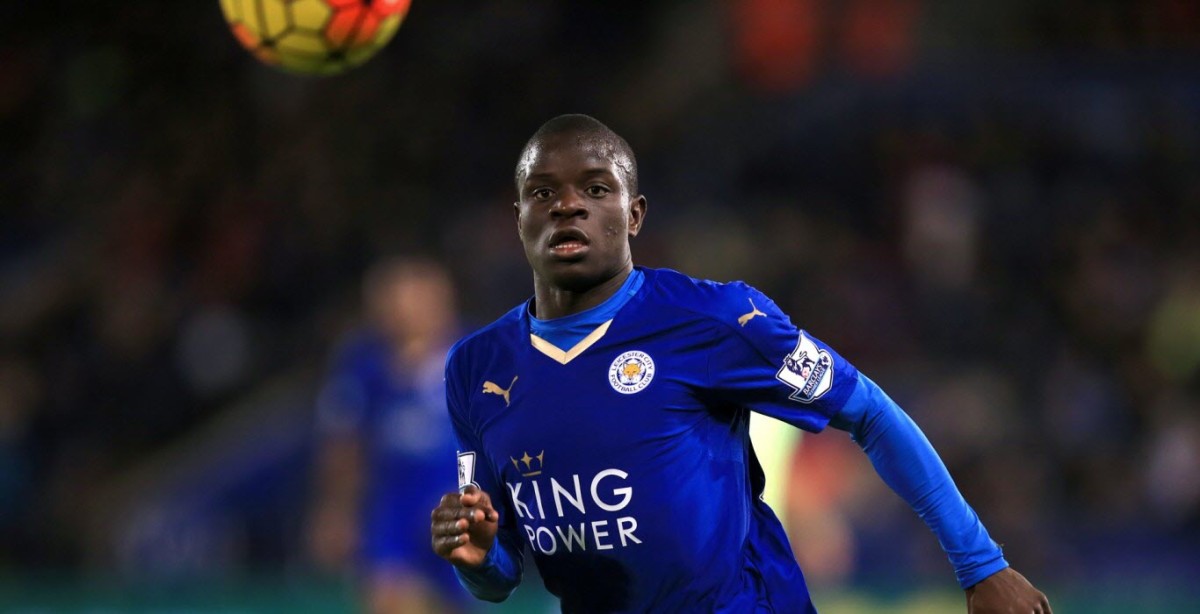 Who is N’Golo Kanté and what has led to his meteoric rise in the English Premier League this season? Joining Leicester City from recently promoted Caen in France, Kanté joins the list of relatively unknown imports who have made immediate impact at their respective clubs.

In a riveting clash between title contenders Arsenal and Leicester City, Kanté emerged as one of the top performers. He was everywhere; plugging up holes, initiating attacks, making key interceptions and even dribbling in pressure situations. But this doesn’t fully capture the subtleties of Kanté’s game, which allow him to produce what he does.

(Courtesy of @ReneMaric at spielverlagerung.com)

Why is this important or advantageous? Compared to man-marking, you don’t compromise your defensive organization by marking your opponent too tightly. Additionally, you still maintain good access distance to your opponent compared to position-oriented zonal marking, which is more passive.

Claudio Ranieri’s Leicester City tend to line up in a low block 4-4-2 system. Their defensive organization generally utilises a man-oriented zonal marking scheme. This means that Leicester players cover the space around their position, maintaining a certain distance to the closest opponent. Specifically, Kanté and Drinkwater are able to provide more defensive stability to Leicester’s midfield and overall shape through this strategy.

As a result, Kanté increases his likelihood of interceptions, tackles, and ball recoveries. The man-oriented zonal marking scheme provides a stable reference point to better disrupt the opponent’s build up phase.

Playing away to Arsenal, it’s commendable that Leicester limited their opponents to only four chances created in the first half (with Mesut Ozil involved in none of these). After the red card in the second half, Leicester’s defensive shape could not sustain Arsenal’s pressure and they increasingly conceded more chances.

Much of this analysis will focus on Kanté’s first half performance, where he played within a standard XI rather than a man down.

“This is where a player wins back the ball when it has gone loose or where the ball has been played directly to him.”

The stats above not only reflect the Frenchman’s effectiveness in disrupting play, but also demonstrate Kanté’s heightened impact in the first half.

As discussed earlier, the man-oriented zonal marking scheme provides a solid base for players like Kanté to disrupt the opponent’s play.

In this first example, we see Kanté make a tackle and then adjust his positioning to cover space, whilst simultaneously allowing good access to the opponents closest to him.

This was not an isolated situation. Here he intercepts the attempted pass from Per Mertesacker to Francis Coquelin:

Kanté’s anticipation allows him to detect the action patterns of the opposition; he has an idea of what they’re going to do before they even do it. This represents a more proactive style of defending, and makes it difficult for the opposition to utilise their normal patterns of play in build-up phases.

Along with Kanté’s incredible anticipation, another string in his bow is his ability to turn defensive actions into immediate attacking opportunities for his team.

Putting it all together

Aside from Kanté’s incredible anticipation, his ability to turn defensive actions into immediate attacking opportunities for his team is a key part of Leicester’s threat in attacking transitions.

It is common for many midfielders in the same situation as this to dwell on the ball whilst waiting for a less risky option. However, in one fell swoop, Kanté intercepts Mertesacker’s pass, creates separation from his marker (Alexis Sanchez), then plays a pass to Vardy on the run. Whilst this attack did not lead to a shot, it still illustrates the attacking possibilities that Kanté’s presence creates.

On the surface, Kanté’s interceptions and tackles capture attention, but what about how he operates in buildup? Measuring a player’s impact in the build up phase is littered with subtlety and nuance.

Many factors come into play and focusing too intently on an isolated event may detract from the larger picture. A simple movement into open space may be enough to keep the attack alive and lead to a shot on goal. And if there is too much focus on the ball, these subtleties may be missed.

One subtlety exemplified by the GIF below illustrates how Kanté simply offering himself as a passing option creates space for his teammates, Riyad Mahrez & Shinji Okazaki, as Kanté drags a marker with him (in this case, Coquelin). This allows Danny Drinkwater to bounce a pass off Kanté then sprint towards Arsenal’s 18 yard box for a potentially dangerous piece of combination play.

If Kanté doesn’t show for the ball quick enough, then he won’t drag out his marker to leave space in behind. If his marker doesn’t get dragged out of position then it’s more difficult for Mahrez and Okazaki to find spaces to occupy. In this case, Drinkwater has less room to run into as Coquelin maintains his position, which likely means Leicester have to redirect possession instead of attacking quickly in local areas which they like to do. A perfect example of Leicester attacking in local areas:

Throwback to when Leicester turned into a peak Barcelona. pic.twitter.com/V8G3sDySk4

One of the key aspects of becoming a top-level midfielder is being able to retain the ball in pressurised situations. This gives the team more time to organise into variable attacking structures, and commits the opposition, who will often have the tendency of being attracted to the ball, thus opening spaces elsewhere to exploit. The GIF below displays how Kanté doesn’t panic when put under pressure, which is crucial to keeping the play alive.

Last but not least, a GIF which demonstrates the subtle movements & touches that players like Kanté display in keeping attacking moves alive. In this case, it leads to the controversial penalty decision which gives Leicester the lead. It comes as no surprise that the media focused more on the referee’s decision than the actions which led to Vardy receiving the ball in the first place.

Courtesy of @deepxg’s PATCH metric, here is a diagram which displays Kanté’s first half performance: 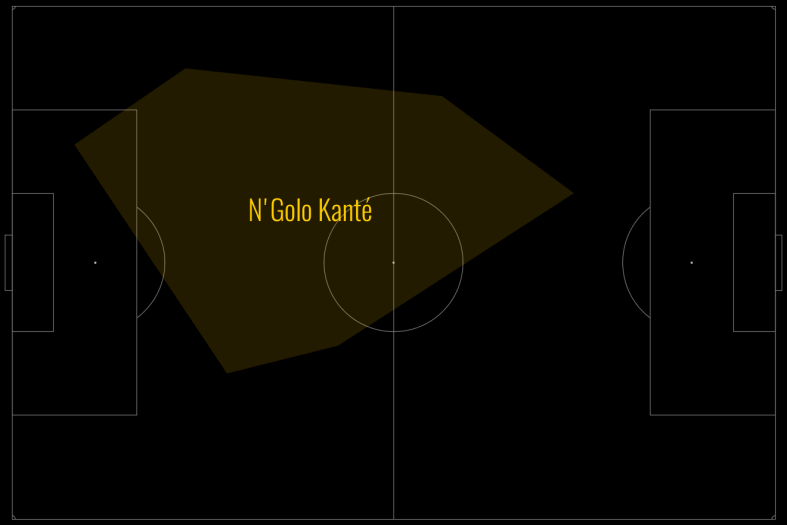 The diagram above represents Kanté’s defensive territory, meaning where he made interceptions, tackles, fouls and more.  The color denotes how much he allowed the opponent to progress through his territory via ball progression, green being good and red being bad.  Considering Leicester tend to give their opponents space due to their low block, the grim yellow colour is understandable.

What’s interesting is despite the high number of fans who raved on social media (one ecstatic fanboy here) about Kanté’s performance, according to @deepxg’s PATCH metric, it was his 14th best first half performance out of 22 first half appearances and second worst performance over all games (26).  With some context, we can make sense of this data, because it’s not often Leicester go down to 10 men, let alone going down 10 men away from home to Arsenal.

As comparison, here is a diagram of Leicester’s PATCH for the first half:

Another example comes from Sander (@11tegen11) when Leicester played away to Manchester City and won (Kante in light blue).

Here's how deep Leicester sat this match.
And how big N'Golo Kanté is for them. pic.twitter.com/iNm0Zafxii

Thanks for reading and I hope you have come away with a deeper appreciation for Kanté’s game, why he’s so crucial to Leicester, and why I think he’s performing at world class levels.