Following an indifferent first season at Tottenham, Mauricio Pochettino’s team have clicked into gear. A number of astute transfer decisions have created a deep squad with a number of potential options for Pochettino to utilise. Harry Kane has emerged as a genuine superstar, and Eric Dier has become a full-time defensive midfielder. But one of the key factors in their rise is Pochettino’s tactical system; this ruthless machine of a Spurs team is entirely different from the soft-centred teams of years past.

A key part of this change comes from an altered tactical approach. As a disciple of Marcelo Bielsa, pressing forms a vital element of Pochettino’s strategy, but even more important is ‘counterpressing’ (or ‘gegenpressing’). This refers to an immediate press following the team’s loss of possession. This has a number of defensive & offensive advantages, but perhaps the most important is the impact it has on limiting the opponent’s ability to transition quickly.

Upon Pochettino’s arrival from Southampton, the Tottenham squad struggled with this concept. But as the Argentine’s reign has progressed, the effects are clear. 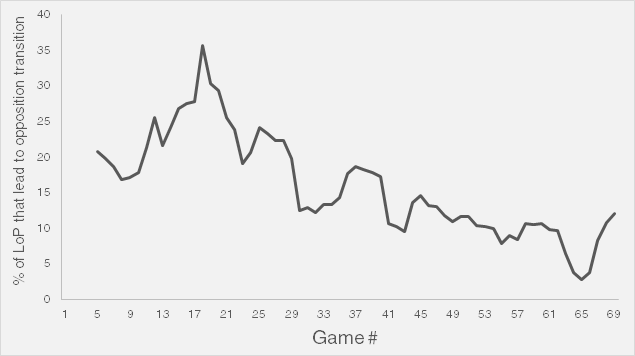 Who gets the ball back? 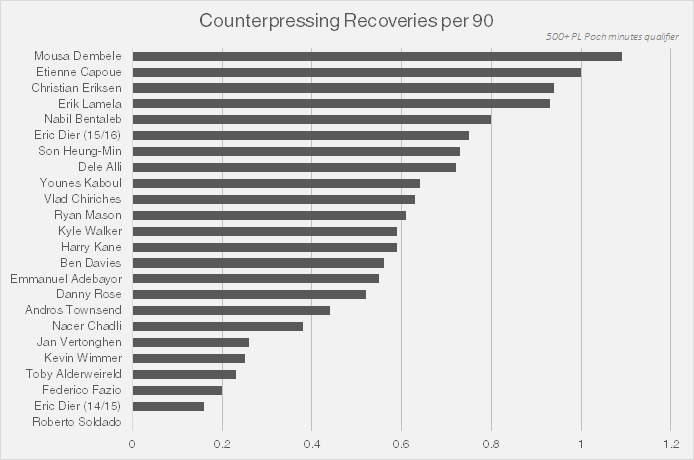 Number of ball recoveries (in counterpressing situations) per 90 minutes

A large part of the counterpressing improvement comes from the increased presence of Mousa Dembele. From 1140 Premier League minutes in 2014/15, the Belgian has already recorded 1826 so far this year.

But aside from Dembele, there are some other key contributors. Erik Lamela is something of a counterpressing machine. He regularly produces the sort of intensity that most players only have when attempting to soothe a damaged ego after losing possession themselves. This completely differs from Christian Eriksen’s style, who often looks as if he’s contributing nothing to regaining the ball. However, much of his movement comes before possession is lost, where he will position himself far enough away to be a valuable passing option but also close enough to immediately win the ball back should he need to. 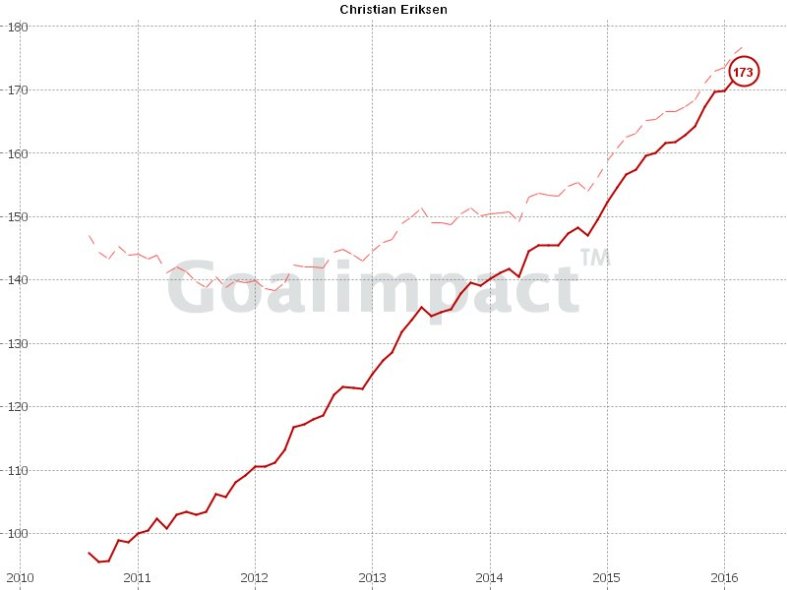 Unnoticed contributions and high levels of anticipation & intelligence are what lead to such a high GoalImpact for Eriksen.

Lamela will always get more coverage for his pressing than Eriksen because his contributions are obvious. But Eriksen is unique in his ability to win the ball back quickly, and at high volume.

Some players’ contribution to counterpressing comes from ricochets, or immediate tackles. Lamela, on the other hand, is the only ‘front four’ player with an average time per counterpressing recovery of over 2.5 seconds.

Erik ‘duracell bunny’ Lamela: after failing to win the ball with his initial tackle attempt, he keeps going and eventually gets it back. 2-0 up, one minute left until half time? No problem.

However, if Adebayor doesn’t win the ball straight back then it’s unlikely he’ll continue the press. After being a prominent figure in Pochettino’s first 10 games (starting nine of them), he was soon dispatched and didn’t start another Premier League game for Spurs. Pochettino briefly flirted with using Soldado, but the emergence of Harry Kane came at the perfect time.

Aside from his goalscoring ability, Kane is adept at holding onto the ball in tight situations. Tim Sherwood described his play-style a “nine and a half”, and that’s a fair reflection of his ability to combine with teammates. But prior to Kane’s rise, Spurs were something of a mess. Structurally, there was little support for the striker after he received vertical balls from the centre backs or deep midfielders. 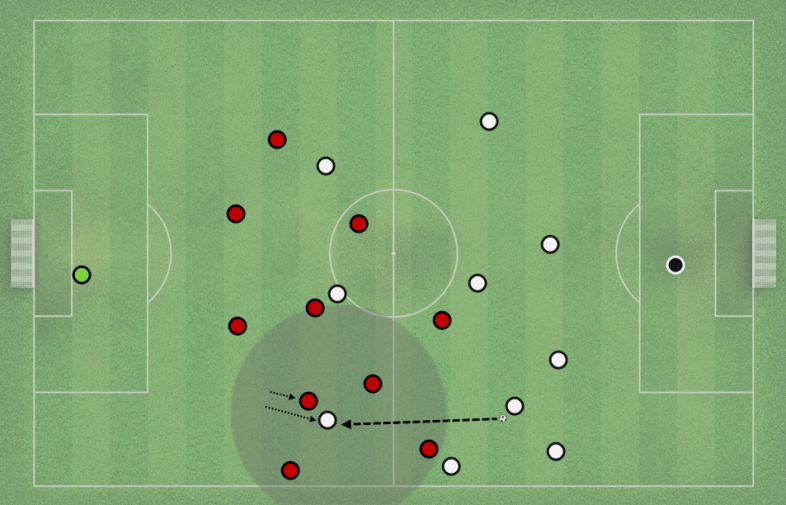 vs. QPR (August 2014): this sort of situation was common for [very] early Pochettino Tottenham. Bentaleb plays the ball into Adebayor even though his teammates have not formulated any sort of support structure to allow the team to retain possession. And you better believe Adebayor isn’t chasing it when he does lose it…

vs. Leicester (March 2014): Eriksen pre-empts the vertical pass into Kane’s feet, and so drifts into space to allow an immediate first-time pass. Eriksen’s anticipation is vital to Spurs both in- and out of possession.

From the same match: following a loss of possession, Bentaleb counterpresses, and his tackle goes straight to Kane. Bentaleb makes a third man run whilst Eriksen receives the ball from Kane. Unfortunately the cross from Bentaleb is wasted as the right winger (Townsend) does not pre-empt the attack and make a movement towards the front post, leaving Bentaleb isolated with few options.

One of Pochettino’s biggest difficulties at Spurs has been finding a stable, solid midfield duo at the base of his midfield. Andre Vilas-Boas left a pretty porous midfield, and Tim Sherwood made matters even worse. He’s used 17 different pairings in the Premier League to date, with seven of those making at least three appearances together. Only two pairings have more than ten games together; with Nabil Bentaleb & Ryan Mason playing together 19 times (all 14/15) and Eric Dier & Mousa Dembele paired together 12 times (all 15/16). 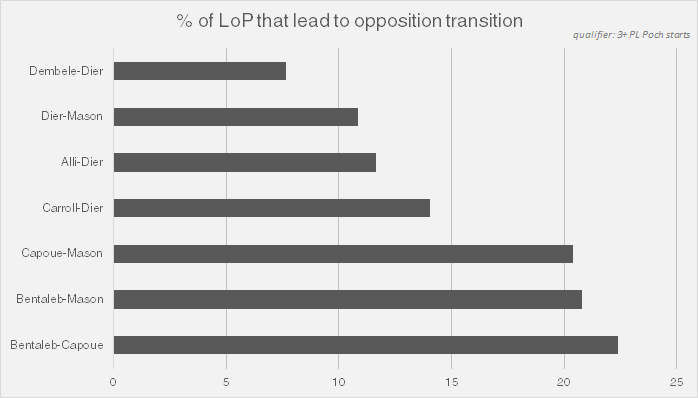 What happens to Tottenham’s LoPs with different midfield combinations on the pitch? After cycling through many different combinations, it looks like Pochettino has found a winner.

As established earlier, Dembele is a monster in counterpressing situations; so it’s no surprise to see his name at the top. But what’s more interesting is the common link between all four (!) of the top combinations: Eric Dier. Part of the reason he’s top of this chart is that he’s only played midfield in the structured team of 2015/16, rather than the relative mess of 2014/15. But his impact to this change shouldn’t be understated. His counterpressing recoveries per 90 moved from 0.16 to 0.75 with the positional switch. But more important was his effect on the team.

vs. Crystal Palace (September 2015): when his central midfield partner gets tackled and loses his footing on the edge of the box, it falls on Dier and the defenders to deal with a potentially dangerous Crystal Palace transition. Dier stays wide enough to restrict the passing lane to Bakary Sako whilst the ball-carrier is pressed by his teammate. He then edges inside so he can attempt a tackle if Walker can’t catch up. In fact, Walker does catch up and Kane comes back to complete the turnover without the ball reaching Tottenham’s half. Dier doesn’t touch the ball once but his positioning & movement was a key part of a successful defensive transition.

vs. Leicester (January 2016): Ryan Mason goes flying in after Harry Kane loses the ball. But he’s easily turned and Dier is again forced to deal with the transition. Dier attempts to force Albrighton into a less dangerous wide area, and Alderweireld helps dissuade him from dribbling centrally by temporarily stepping up before dropping back. Dier forces him wide and the transition is killed.

As well as managing defensive transitions, Dier is also capable of understanding when to step up in advanced areas of the pitch. 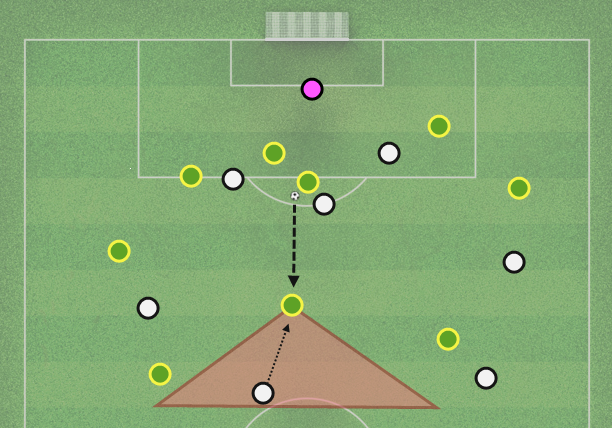 vs. Norwich (December 2015): Norwich’s central midfielder receives the ball with his back to Dier. He doesn’t check to see who’s behind him, meaning Dier is not in his field of vision. Dier also sees that Spurs have many men forward from the previous attack. So he moves forward and aggressively presses the man on the ball. In this case, the press is *too* aggressive and he makes a foul.

But whilst Dier’s ability in defensive transitions and counterpressing situations is clear, there seems to be a dependence on his contribution. Almost all of the players in Tottenham’s midfield are technically adept, natural midfielders. But when in possession, Dier will often look just like a central defender playing central midfield. This means he gives the ball away when other players might not do so. And when that does happen, it’s not pretty. 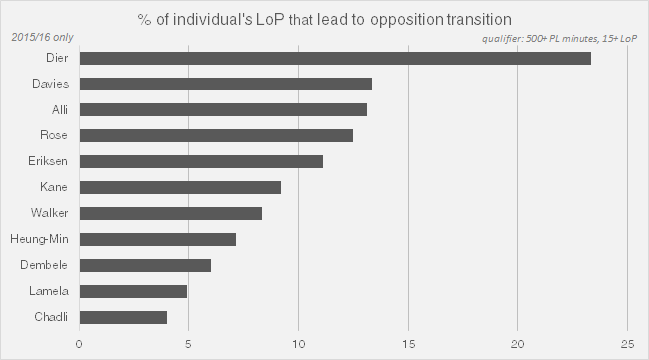 This makes sense, given that Dier isn’t around to manage the transition if he loses the ball. Often this falls to Dembele, who is less comfortable merely shepherding an opponent into a wide area. Or sometimes Eriksen drops back into a situational central midfield role if Dier moves forward, but he can become a bystander against quick transitions. Eriksen’s style is based on immediately regaining possession via clever positioning. If the opposition are able to isolate him 1v1 in space… trouble. 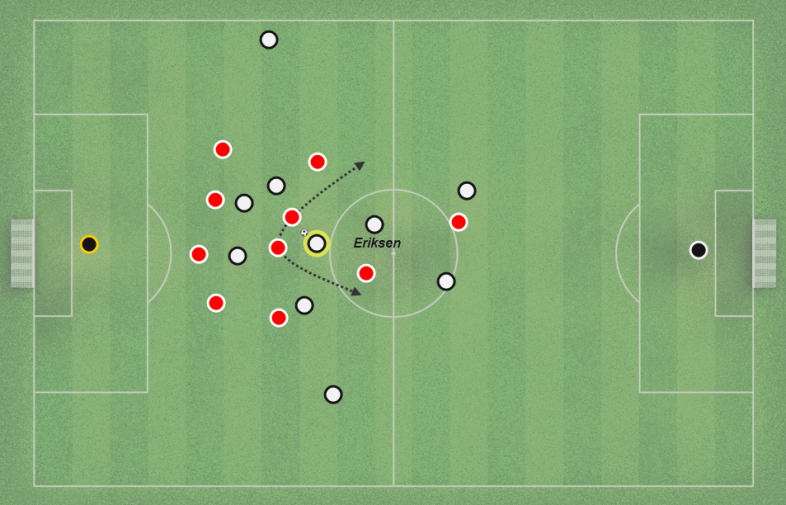 vs. Arsenal (March 2016): Dier gets mugged of the ball by Arsenal’s midfield after two poor touches. This wasn’t a pressure situation initially, but with four or five players ahead of the ball, Tottenham are in trouble as soon as they lose it. Eriksen is the deepest midfielder, but he stands straight on instead of sideways. This means he cannot move with the play, and is easily bypassed. Arsenal then have a 3v2 transition with Eric Dier nowhere to be seen, and Mesut Ozil as one of the 3.

Arsenal did well to exploit Tottenham’s poor attacking structure to pressure Dier. Spurs are neither defensively compact for a potential turnover, nor offensively spread enough to stretch the opposing defense.

But whilst Dier isn’t particularly comfortable on the ball, his defensive contributions mean that his place in the side is warranted; particularly when it’s a near-impossible to take the ball off an in-form Dembele. This balance was something Spurs struggled to find throughout 2014/15, where the first choice pairing was Nabil Bentaleb & Ryan Mason. Bentaleb offers many of the same qualities as Dembele (albeit to a lesser degree); strong counterpressing recoveries, comfortable at building play, and technically proficient. But Ryan Mason is nothing like Eric Dier.

Mason’s natural inclination is to make a forward movement regardless of the situation developing around him. This can often be a handy asset, but it’s detrimental more often.

If partnered with Dier, the midfield instantly looks more stable. But this means Pochettino has one player for one midfield slot and four potential partners (Dembele, Mason, Bentaleb & Carroll). Something will have to change in the Summer, particularly given Spurs’ new status as a Champions League club.

Pochettino has found himself a potentially title winning front six. For a lot of reasons, these players gel particularly well. But one vital reason is that all of these guys contribute something to the counterpress. Christian Eriksen is excellent at immediately winning the ball back; and if he doesn’t, Erik Lamela will hound the opposition. Upon which time, they’ll reach Dele Alli & Mousa Dembele, both big midfielders who regularly contribute to the counterpress (or in Dembele’s case, regularly excel). If this second pressing wave is breached and the opposition are able to move into open field, then Eric Dier is there to manage the transition into a wide area. Toby Alderweireld is also a big upgrade over Kaboul & Fazio when asked to defend in space.

For this reason, Spurs’ defense has turned from a laughing stock into one of the best in the league. Will their performances get the title they deserve? Maybe not. But Pochettino deserves huge credit all the same.