For the first time in half a decade, Inter Milan are involved in a genuine fight to win Serie A. With Juventus’ struggles in the early parts of this season, it has opened the door to a four-team battle for the title. Napoli have been arguably the most consistent team in Serie A, Juventus has clawed their way back to contention and Inter already have victories over title contenders Roma, and Milan. Roberto Mancini overhauled their squad during the Summer transfer window, and remodeled an attack that was previously based around striker Mauro Icardi. The Argentine had tied Luca Toni for first in goal scoring in Serie A at 22 goals. Adam Ljajic and Stevan Jovetic were captured on loan deals, with big money spent on Ivan Perisic and Geoffrey Kondogbia. Mateo Kovacic was the only main departure.

On the aggregate, Inter Milan’s attack has been acceptable, especially considering the upheaval at hand. Inter rank 8th in Serie A in total shots, 6th in the % of shots coming from the central part of the penalty area and 4th in expected goals for. There’s a bunch more numbers you could pile through and it would turn out in a similar fashion, ranking Inter’s attack as a respectable team but nothing special.

The manner in which they’ve attained this is fascinating. In an era where team attacking movements have never been more intricate, Inter are an outlier with their attacking approach oriented on athletic ability. They’ve switched between multiple formations: a 4-3-2-1, 3-5-2, 4-3-3, 4-4-2 and recently Roberto Mancini has preferred a double pivot within the 4-2-3-1 formation. The depths of which Inter’s formations have changed has reflected the constant search for a workable formula. So far it hasn’t mattered. They sit top of Serie A. But you get the feeling that the club at times is living on borrowed time with their over reliance on defense, especially in close game situations.

The most striking thing about Inter’s attack is the frantic tempo; constantly looking for passes into their attacking players. Most of the central midfielders that Inter have are broadly classified as athletic ball recyclers with the likes of Felipe Melo, Geoffrey Kondogbia and Gary Medel. As a result, teams have often gone to man marking Inter’s central midfield which has forced either the double pivot or the three man midfield to do one of two things: either make a rudimentary pass to a teammate around them or transition the ball quickly to one of the attacking players.

The central midfielders are all fairly uncomfortable against the press, meaning the full-backs most remain slightly deeper to create an easier passing option should they come under any serious pressure. This makes it more difficult to release the full backs into advanced areas.

Inter can still occasionally get their fullbacks into advanced areas, particularly Alex Telles. But this occurs when they play 1v2 with a wide player, or they collect the ball in a non structured situation and advance it high up the pitch.

As a result, Inter have a tough time creating attacks from the back. When teams don’t pressure Inter’s backline, it can look sometimes that they’re bereft of ideas on how to build play from deep. This often leads to ponderous passing and the occasional ambitious long ball from their centerbacks. It gets even more worrisome when the opposition are pressing Inter. Udinese, and at times Fiorentina, pressured against Inter and it caused them to play on the back foot. During the initial stages of the Napoli match, even when Napoli were up 1-0 they hurried the Inter backline. Nagatomo was particularly targeted, and this forced Inter to retreat back to Samir Handanovic using him as a release valve to restart their attack.

Inter’s poor build-up structure and Napoli’s poor press force Murillo into a difficult situation. He has three main options: pass it back to his GK, make a near-suicidal pass to a teammate in the midfield, or hoof it as far as possible.

Very little of the Inter attack goes through the central midfield, and when it does, it’s often forcing the attacking players to receive the ball much deeper than they would like to. It makes sense to get your best players on the ball as much as possible, but the attacking players are much less dangerous when being asked to collect the ball in the midfield with their backs to goal.

When Inter deviate from playing redundant midfield players and instead use Brozovic, they trade defense structure for a bit of offensive spontaneity. Brozovic is a talented dribbler who can get himself out of tight situations with his light feet and in one smooth motion can either pick out a pass to an attacking player, or create the pass that creates an opportunity for a teammate to advance play.

This suggests the best midfield going forward would be utilising Brozovic in a double pivot alongside one of the many destroyers. Geoffrey Kondogbia, for example, thrived last season at Monaco alongside creative midfielders, but has struggled this year in a midfield full of mostly redundant pieces.

Upon transitioning into the opposition half, Inter’s attacking play is largely based on individualism. The likes of Ljajic, Perisic and Jovetic are adept at receiving the ball in somewhat unconventional areas and quickly putting pressure on the opposition with either a pass or dribble. At its best it’s an efficient way of bypassing their weaknesses in the midfield and producing good scoring chances, particularly when the attacking move involve striker Mauro Icardi. Their only goal versus Lazio symbolized that.

This is Inter at their best: a quick tempo involving a defensive action -> quick pass to the attacking three -> ball into Icardi. It’s everything that Roberto Mancini wants Inter to be with the roster he’s accumulated. However, strip out those moments and you find an attack that is often stagnated. It’s the consequences of relying on individualism to paper over the cracks. When the killer passes aren’t available, Inter will still try and force them in and meekly secede possession. Inter also have a penchant for long range shots when things don’t go their way with the club ranking in Serie A’s top 6 in shots from outside the area.

And here’s the big kicker, the attacking structure that Inter have built has come at the expense of their talisman goal scorer Mauro Icardi. Icardi has been dying for service this season. He’s been receiving the ball about as little as a striker of his caliber can and it’s easy to see why. Inter have built an attack that is the antithesis of a poaching striker. Numerous Inter build up plays in the final third involve overloading on either side and a gap in the central area. When that happens, often times there’s little support for Icardi in the areas that a #10 would generally occupy. This means Inter often rely on 30/35 yard passes to create a chance for Icardi. 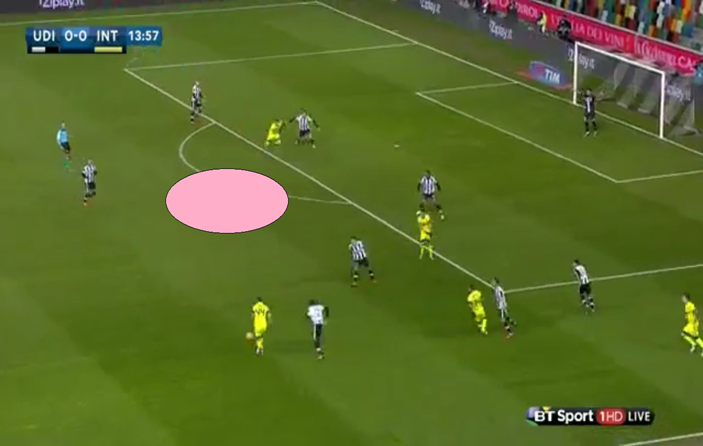 In theory, a permanent switch to the 4-2-3-1 should help rectify these type of situations going forward. There’ll be times when Icardi will communicate to those around him that he is available for a ground pass, but yet no one will provide him the ball. Even though Jovetic wears the #10 on Inter, he doesn’t play as a nominal #10. He moves around all over the place and occupies different positions playing at times; sometimes like a wide player and at times like a second striker. That type of versatility is needed considering the one dimensional nature of the central midfield, but it can come at the expense of building a consistent rapport with Icardi. He’s also quite happy to let fly outside the box shots if he doesn’t sense anything happening around him.

The 4-0 victory against Frosninone in late November was arguably Inter’s best attacking performance. Three of the goals that came in the second half were created from some beautiful team passing and hinted at what Inter could be if they get their attack going. Ljajic’s role in particular was important because he did the brunt work of the creativity on that night, occupied the #10 areas that Icardi can get service from and generally stayed attached to him. He played a nice 1-2 with him which led to a tap in for Icardi.

Jovetic was also more consistent when playing closer to Ljajic, and although his touches were still spread out, there was more of an emphasis on being closer to Icardi for link up opportunities.

After 17 games, Inter’s attack can be best described as still a work in progress. To their credit they have been ruthless in capitalizing on defensive errors and turning them into goals. Their 4-0 victory over Udinese was a testament to that, as they scored three of their goals from defensive errors by the Udinese backline. Inter are blessed with a couple of hyperactive creative midfielders in Ljajic and Jovetic, while Icardi has still managed to score goals at an impressive rate despite being much more of a supporting player than the main focal point offensively. It’s probably fair to say that the offense still being this choppy is a bit of a concern despite having no European football to deal with, but it’s also fair to say the massive roster upheaval Inter had over the summer means this shouldn’t be a surprise.

The Frosinone performance showed a road map that Inter could head down and find attacking success, but this level of performance needs to be attained against teams with a sturdier defense. In an era where a lot of teams are zigging, Inter are zagging. If the club can find more cohesion going forward, we might be looking at the first Scudetto for Inter since the treble winning season six seasons ago.