Following a difficult start to the season and constant tinkering of tactics, Brendan Rodgers seems to have settled on a 3-4-2-1 system. The change is paying off and since the switch, his team have put in top four worthy performances each week. There were positive signs against Manchester United, but David de Gea turned a potentially embarrassing loss into a comfortable victory. Liverpool also dominated the match against Arsenal, but were only able to secure a draw.

The major difference that came in the 4-1 win against Swansea was Liverpool’s style of build-up. Against an Arsenal midfield of Flamini, Cazorla and Oxlade-Chamberlain, the Reds were able to dominate the central zones. The Swansea match saw Rodgers gradually relinquish control of the centre of the pitch in favour of regular 3v2 superiority down each flank. 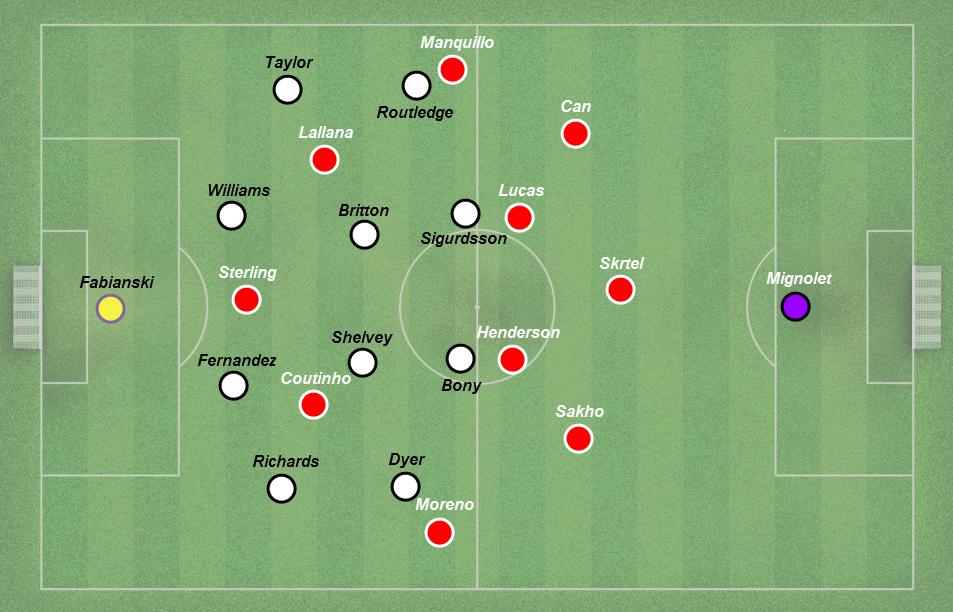 The initial shapes of each team, when Liverpool’s central defenders had the ball

Liverpool started the match with a large amount of ball possession, which comprised primarily of stagnant sideways circulation between the three central defenders. This was because of a lack of central passing options, partially due to a lack of build-up intelligence from Jordan Henderson.

As Swansea’s defensive shape in initial Liverpool build-up was a 4-4-2, Henderson and Lucas were marked by the two Swansea forwards, leaving all three of the central defenders free. This meant that in order to receive the ball, the central midfielders had to lose their man and find a suitable passing angle — something Henderson found difficult. More experienced in a deeper lying role, Lucas Leiva would drop between central defenders or into the unoccupied full-back zone to receive the ball and create space in the centre of the pitch. This would also encourage one of the central defenders to push on and confuse the Swansea forwards. Henderson was rarely able to replicate this and Liverpool struggled to penetrate centrally.

The best build-up is no build-up

With two players in the centre of midfield whose strengths lie in other areas, Liverpool often found the most efficient way to build play was to bypass their central midfield altogether.

Initially playing on the right side of the pivot, Lucas was also able to link up well with Emre Can and Martin Skrtel. One such example came when Lucas was being closely man-marked by Gylfi Sigurdsson; the Brazilian drifts away from the play, creating a central passing lane straight from Liverpool’s deepest player to their most advanced. 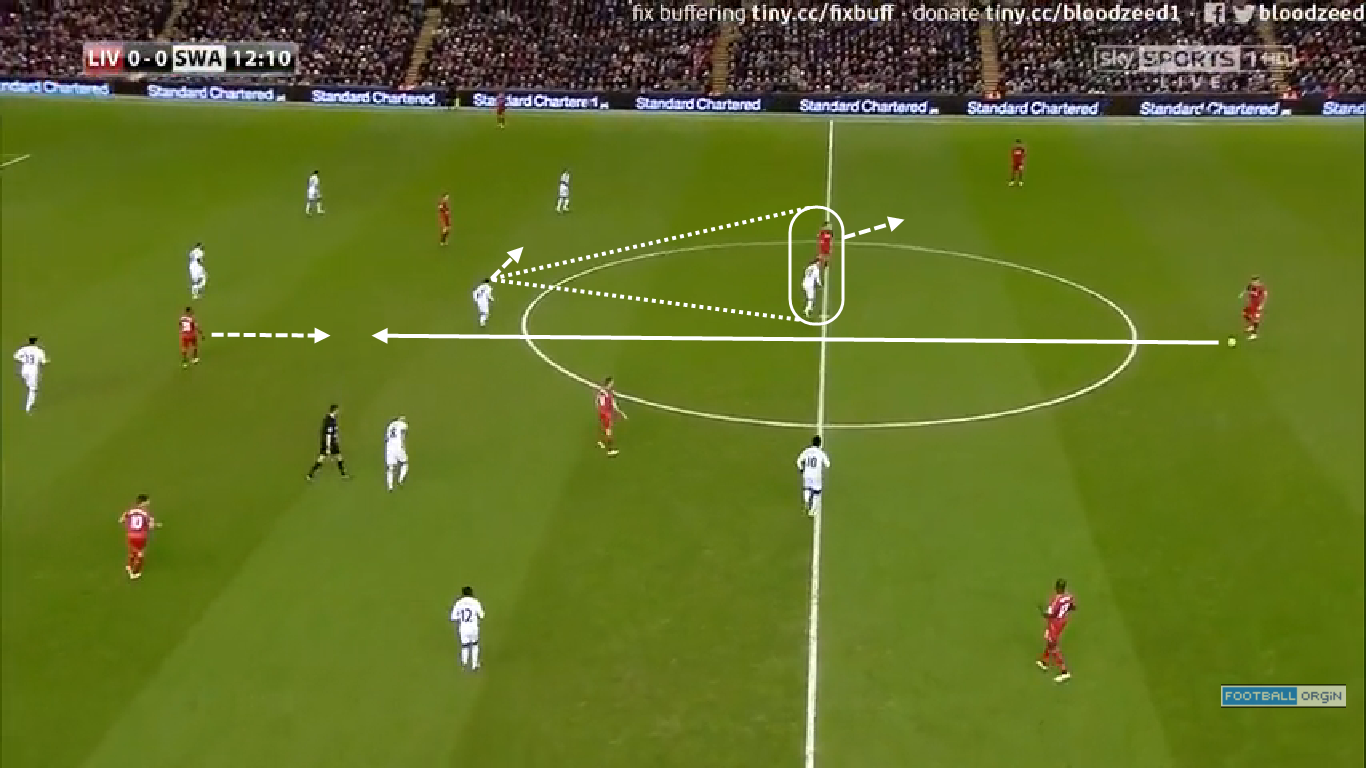 Lucas drags Sigurdsson away from the central zone, and Leon Britton follows, presumably expecting the ball to be passed to Emre Can

Once Sterling receives the ball, there is a major dilemma for Swansea. Given he is forty yards away from goal, it seems wise for the central defenders to wait for Britton to recover position. But Sterling is one of the quickest players in the league over ten yards, meaning he could reach top speed before being closed down. Given Neil Taylor must stay wide due to Liverpool’s wingback stretching the pitch, Ashley Williams would have to defend Sterling 1v1. Not good.

In this case, Britton recovers well and Sterling holds the ball before recycling wide after Nathan Dyer loses Alberto Moreno. A good cross from the Spaniard almost leads to a goal for Liverpool as Sterling continues his run, shooting straight at the keeper. Sterling doesn’t drop off into this attacking midfield zone as much as he should, and often receives the ball back-to-goal with Fernandez marking him tightly.

Aside from direct central passes, the outside central defenders were also easily able to penetrate Swansea’s 4-4-2 shape. In Emre Can and Mamadou Sakho, Liverpool had two of their best ‘laser’ passers in these positions. This means they were able to fire very quick passes into the feet of either the wingback or the attacking midfielder, using the position of Swansea’s winger as their reference point.

Due to Dyer blocking the passing lane to Coutinho, Sakho passes to Moreno

Once Moreno receives the ball from Sakho, a 2v1 is created. Moreno can pass to Coutinho, or dribble down the line himself and put a cross in. Even better is when the Brazilian makes a run between Swansea’s RCB and RB; this draws the attention of the RB and creates a huge pocket of space for Moreno to dribble into. Shelvey is so late to cover that it actually leads to Leon Britton getting there before him, who has to leave his own man.

Britton’s man, Lallana, finds a simple ball to Henderson in space. Having continued his run infield, Moreno is able to apply the finish from the cross. All created from wing superiority and some unselfish movement from Coutinho.

Once the outer central defenders drifted wide and created passing angles for themselves, it was vital for one of Swansea’s deep midfielders to come across and restore numerical equality. But this happened very rarely, particularly on Shelvey’s side, where Moreno and Coutinho exploited the space well. Liverpool continued to focus their attacks down this side, and it paid off.

The above example shows Moreno receiving the ball, but the more common pass from Sakho was to Coutinho in the halfspace. None of the four players that encircled Coutinho knew whose job it was to pick him up and allowing him to receive the ball in 5yards+ of space in the final third is always dangerous.

Eventually it was Ashley Richards, Swansea’s right back, who was brought off at half-time. Garry Monk then went on to praise Jonjo Shelvey’s performance in his post-match interview when it was Shelvey who created an almost impossible situation for the inexperienced Richards.

As the game went on, Liverpool seemed to become more aware of their advantages.

Despite starting with superior possession numbers, they slowly conceded control of the ball in favour of repeated direct passes through the midfield. Jordan Henderson appears to abandon any pretence of being a build-up player, and this contributes massively to Liverpool’s final third play. Instead of being shackled to a holding midfield role, Henderson pushes forward into a free role and Liverpool play with one holding midfielder covering the whole of that horizontal zone.

First half touches of Henderson & Lucas against their second half equivalents

From a previously rigid set of clearly defined left/right roles, Rodgers switched things up at half-time. It remains to be seen whether this was because of Henderson’s lack of impact in the initial phases, but it certainly helped Liverpool’s offense. Henderson drifted around the pitch as the free man, creating numerical superiority in a number of scenarios. It’s no surprise that Henderson made a point of praising Rodgers’ tactics post-match as Swansea had no answer and Liverpool found central penetration easy in the 25 minutes after half-time.

From a tactical stand-point, the change represented a shift back to Rodgers’ 2013-14 mentality. Swansea were able to score on the break but Liverpool’s offense was so overwhelming they were always going to have a strong chance of winning. It also played into Henderson’s strengths — he’s not a deep or holding midfielder, and is at his best when his role is based on constant movement rather than positioning. His edge as a top-level player is his energy and final third movement; neither of these facets of his game were being utilised in the early stages.

The high press from Henderson & Lucas goes some way towards nullifying the potential weakness defensively. Lallana also does some excellent work in dropping into the midfield to press the ball-player and limit the speed of Swansea counter attacks. Against a team more potent in attacking transitions, this approach may not be possible.

Emre Can stepping into midfield

Despite coming on at half-time in the previous game at centre back, Rodgers’ decision to use Can in the back three caused quite a stir prior to kick-off. But the German was calm & collected in defense, and efficient in possession. Much like Sakho on the left, Can’s technical ability was key to Liverpool’s dominance of the flanks.

One tactical aspect that was underutilised by Liverpool was Can’s ability to step into midfield. He did this several times, but the circulation from Sakho to Skrtel to Can was usually not quick enough and Swansea were able to reset. 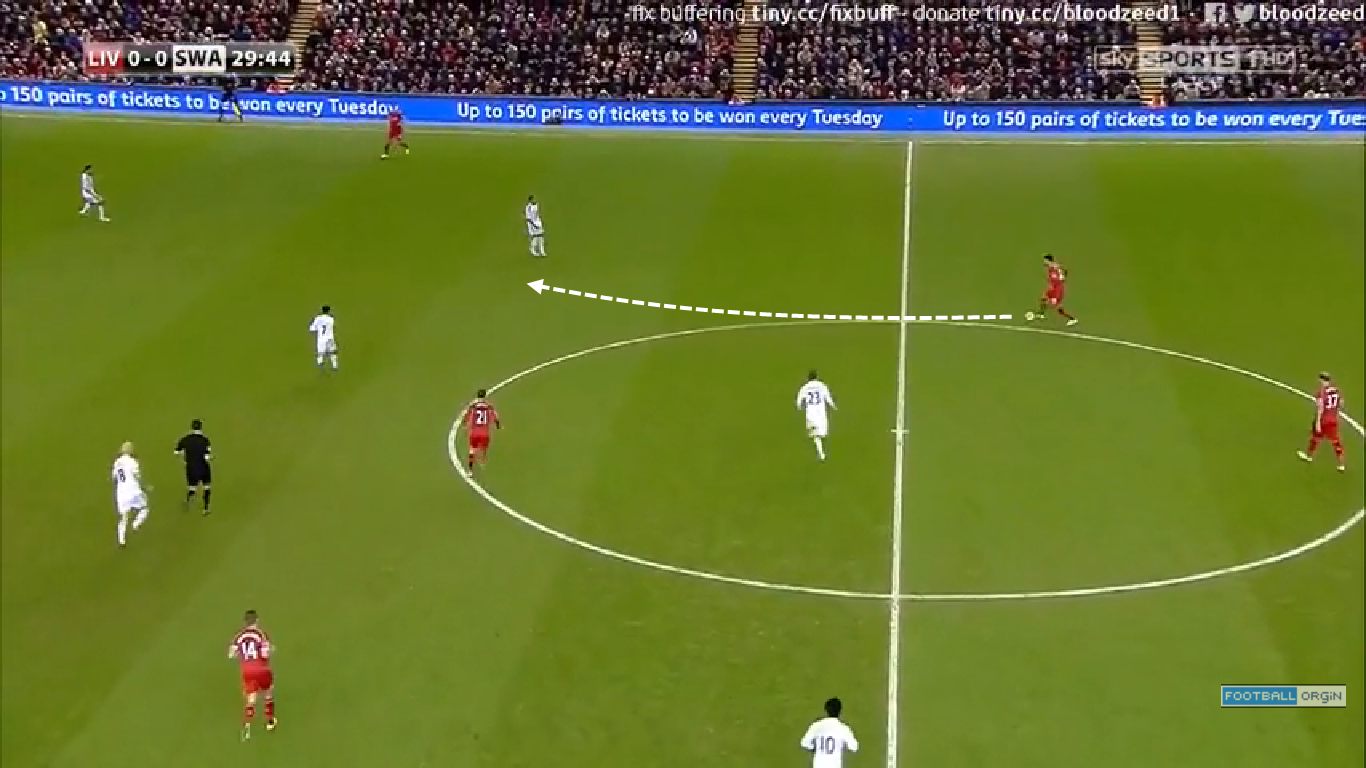 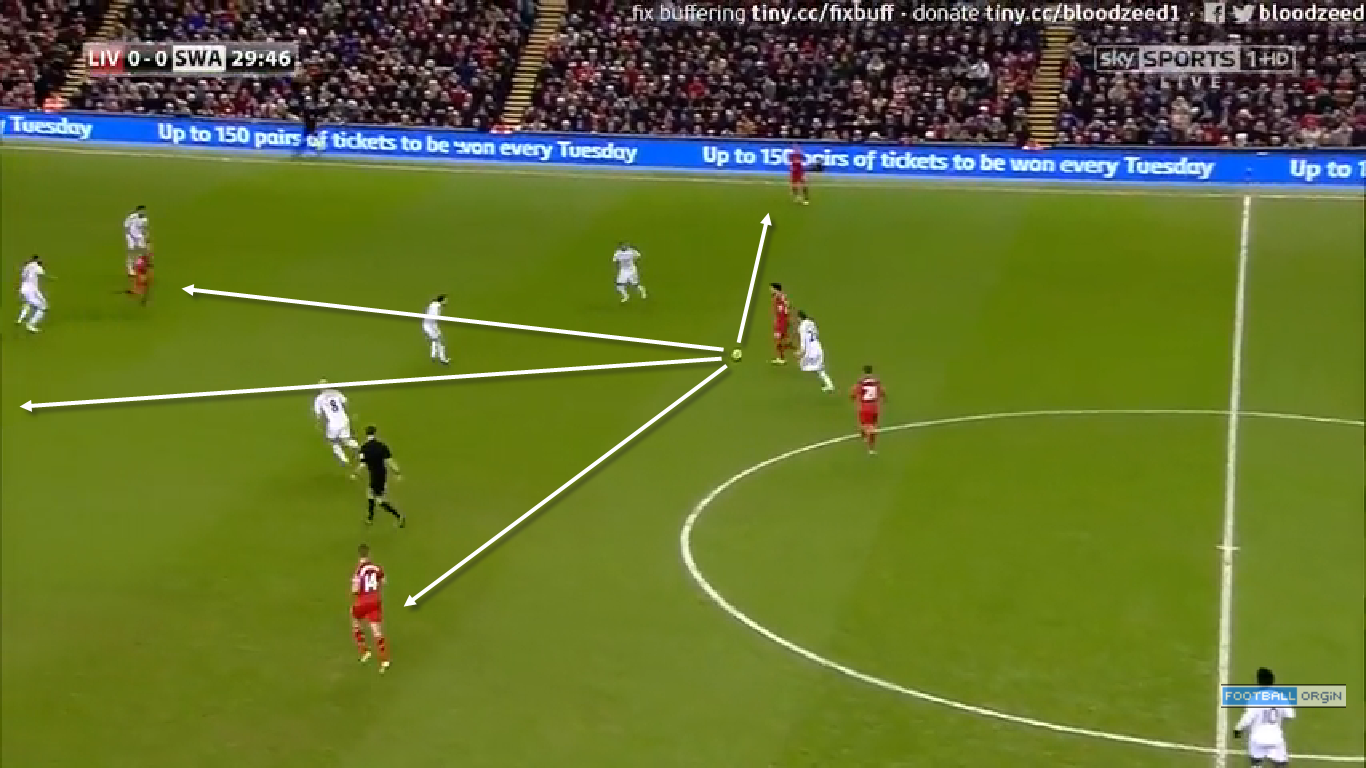 Circulation is quicker than usual from Sakho & Skrtel, meaning Sigurdsson doesn’t slide across in time and Can has room to move into

Once Can steps into the space, surprising Sigurdsson with the positive intention, he has several passing options. The ideal in this scenario would’ve been a hard pass into Lallana for a first time flick down the wing to Manquillo, but Can plays it into Sterling and the move breaks down. Regardless of the result, the passing options available suggest that this is a strategy Liverpool should pursue more often.

Even if Can is sloppy on the ball and loses possession, Liverpool are adequately positioned for a defensive transition. Bony is 2v1 against the other two central defenders and Lucas positions himself behind Can to cover the space. Allowing Can more freedom in this role could be vital in helping the Reds control the centre of midfield, given he is more comfortable on the ball than Lucas.

All future opposition have now seen Rodgers’ willingness to utilise the wings, even at the cost of controlling the game. Relatively inexperienced manager Garry Monk was unable to find the answers within the match, but future opponents will be able to prepare more adequately. There are still glaring holes for the opposition to exploit, particularly if Rodgers continues with the Henderson-Lucas double pivot.

In big games, losing control of the central areas can be disastrous. It is yet to be seen whether this approach is Rodgers’ preference, or merely because Swansea are far stronger at defending centrally. This question should be answered against Leicester, a team who really struggle to prevent midfield penetration despite the presence of Cambiasso. Their strength lies on the wings, meaning Alberto Moreno is unlikely to have so much space.

This should not be a problem. As illustrated earlier, when the outside central defenders receive the ball, they merely have to use the attacking midfield passing option more often. If the wingbacks hug the touchline, then whoever plays in the attacking midfield roles will find lots of room in the halfspace for direct passes from Can and Sakho.

All it needs for Liverpool is a good transfer window and this approach could be vastly improved. If Rodgers wishes to control the game with this shape then none of his current central midfield combinations are adequate. Jordan Henderson was excellent when unleashed in the second half, but this tactical anarchy is often not possible. Liverpool need a player capable of building play through the central areas but also providing a solid defensive platform. As it stands, the only deep midfielder Liverpool have who is effective at building play is Joe Allen, who could provide a potentially reasonable alternative to any transfer. But when the likes of Axel Witsel are on the market at discount prices, maybe it’s worth a go?